I began my new job yesterday! So far I like it, my coworkers are all very nice, the work seems interesting (I am looking forward to getting into it properly) and the workplace itself? It is very different than working at the university. Overall it is very nice to be working again, getting up in the morning with somewhere to go!

The blog may be put on the back-burner (not saying much with the frequency I have been udating here for a long time now), simply because I focus my energy on working, and the commute is slightly more than an hour, so free time may be a factor as well.

But for now, let’s take a look at some pretty meringues I made before I began working again! 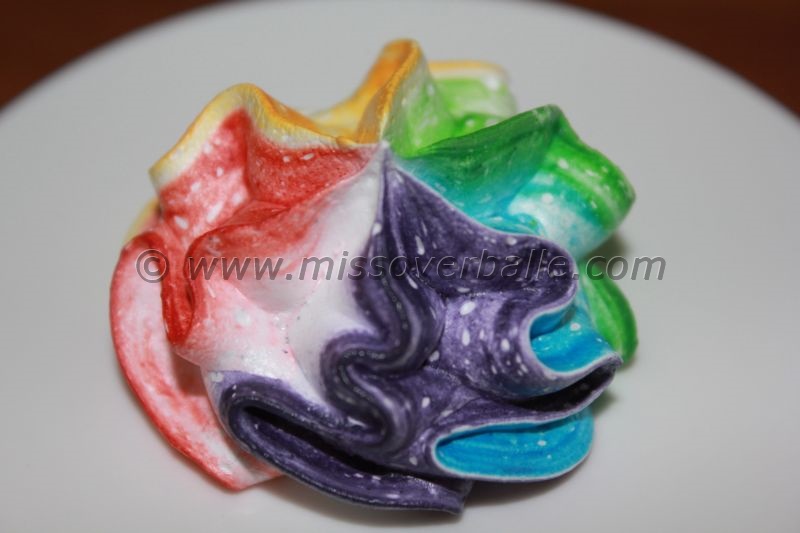 I have been on a meringue kick lately, after moving into an appartment with an oven that can actually hold low temperatures!

Remember when I reviewed the Meringue Girls’ Cookbook? They colour their meringues by painting the inside of the piping bag with food colour, rather than colouring the meringue mixture itself. So I figured that rather than using one colour, I could use five, making rainbow meringues!

The process is rather simple, start by fitting the piping bag with a big nozzle. I used a star nozzle for these, but any big nozzle can be used, or omit the nozzle entirey and cut the tip of the piping bag. The take a brush and paint stripes on the inside of the piping bag, from the nozzle and roughly 5 cm upwards. For the rainbow look different colours are chosen, but a single colour would look great too, or maybe two alternating colours? 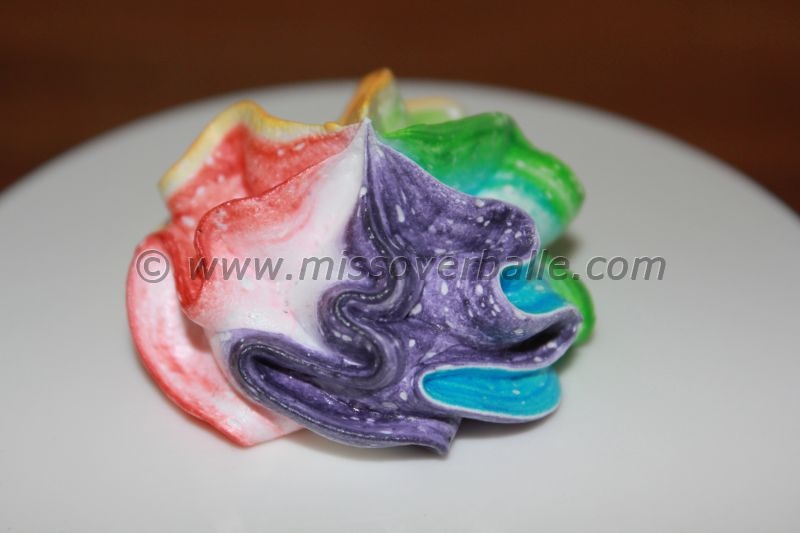 Don’t worry if the food colour won’t spread on the plastic bag, but accumulates in drops, mine did as well, but the result is still pretty.

After painting inside the bag, fill it with meringue (recipe below) and pipe kisses on a baking sheet with parchment paper. Bake the kisses at 100 degrees Celsius for 45-60 minutes. The meringues can be removed from the oven when they come of the parchment paper easily, but leaving them in the oven longer will give a less chewy, more crunchy meringue (This is up to personal taste).

Yields 25-30 meringue kisses depending on size

Whisk the egg whites until foamy, and sprinkle in the sugar while whisking. Add the vanilla bean seeds. Whisk at very high speed until a very stiff, glossy meringue forms. Transfer to a piping bag and pipe kisses on a baking sheet with parchment paper. Bake at 100 degrees Celsius for 45-60 minutes. The meringues can be removed from the oven when they come of the parchment paper easily, but leaving them in the oven longer will give a less chewy, more crunchy meringue