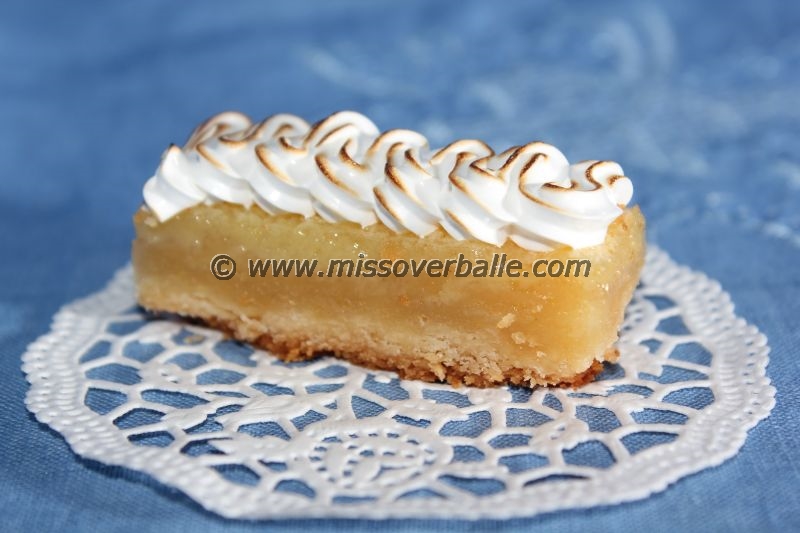 This weekend I found myself with another bag of bergamotte lemons (I wonder how that happened…). I wanted to use them for something new, rather than remaking the bergamotte mini loaves from a couple of weeks back (delicious as they were). So I decided to browse my Pinterest boards, in the search of lemony recipes to try out, and I stumbled upon these lovely Lemon Meringue Pie Bars, by Kristan, the blogger behind Confessions of a Cookbook Queen.

I was intrigued. Years ago, I did some research on how to make Lemon Meringue Pie, and was somewhat surprised at the amount of things that can go wrong when attempting this culinary creation. However, Kristans recipe seemed simple and straightforward, so I decided to give them a shot.

My first attempt ended badly. I may have slighly underbaked the crust, so when I poured over the filling it went through the crust rather than over it. However, I was not to be deterred, so I tried Again, this time making sure the crust was baked, and when adding the filling I poured it over the back of a large spoon, so the filling was spread out better.

This time it worked like a charm, and tasted absolutely delicious. The bergamotte taste really came through in the filling, and paired beautifully with the crust and the sweetnes of the meringue. It will not be the last time I make these (I wonder if they would be good with lime or grapefruit?).

I doubled the amount of crust in my bars (what can I say, I’m a crust girl), and converted the recipe to metric scale.

I had some meringue left over, but I didn’t add a lot to my bars, as they were cut out in finger size pieces, rather than larger bars. Larger bars would use more meringue, so the original amount should be fine. However, if you have leftovers, you can bake it just like you would any other meringue!

Prepare the crust by mixing flour and powdered sugar, and crumbling the butter in the flour michture, until a crumbly dough forms. Press the dough into a baking tin, 10×20 cm, which has been lined with parchment.

Bake the crust at 175 degrees Celsius for 10-15 minutes until golden.

Meanwhile, prepare the filling by mixing all the ingredients and whisk them together using a mixer on high speed for 90 seconds.

When the crust is golden, remove the tin from the oven, and carefully add the filling to the crust by pouring it over a spoon or spatula. Return the tin to the oven, for about 20 minutes more, until the filling is set, and no longer liquid.

Let it cool and chill it completely before cutting it into bars with a sharp knife.

When the bars are cut, prepare the merigue. In a water bath combine egg whites and sugar, ond heat gently while stirring, until the sugar has dissolve. Transfer the mixture to a bowl (make sure no water is added accidentally) and whisk with a mixer until a stiff, glossy meringue forms. Transfer the meringue to a piping bag, with a nozzle if you like, and pipe the meringue unto your bars (you could spoon it over as well).

For a finishing touch, use a Creme Brulée torch to brown the meringue (or set under an oven broiler, if you have one).

If you don’t eat them right away, they should be stored in the fridge. 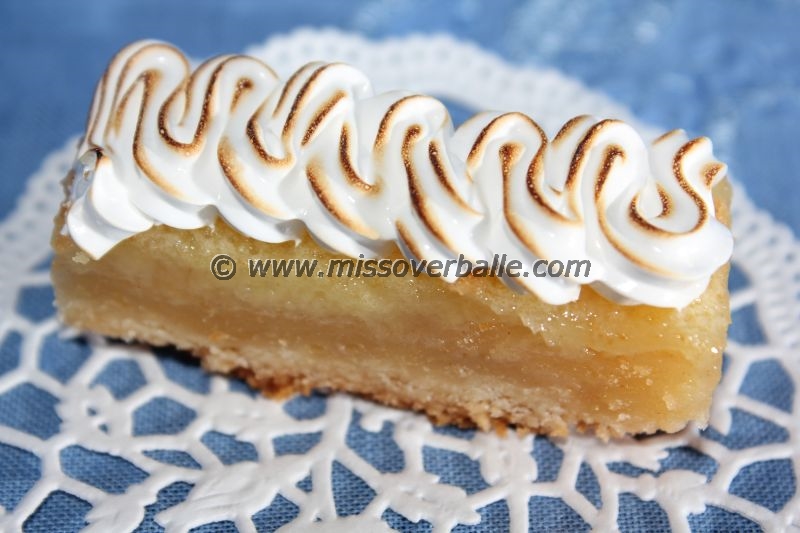