My boyfriend bought a deep fryer. So after a meal with fries, he looked at me and said the oil still was  in the fryer, and would I like to make donuts?

Yeah. I would like to make donuts. So I did.

Or, actually, I made crullers. French Crullers, as Ms. Humble does, though I omitted the honey glaze, and just dusted with powdered sugar and cinnamon.

Mix butter, water, salt and sugar in a saucepan and bring to a boil. When combined, add the flour, and stir until combined.

Cook for 3-4 minutes, removing at much water as possible. Transfer the mixture to a bowl and beat in the whole eggs, untill well combined, then add a little egg-white at the time, still beating, until the mixture is glossy but still holds it shape.

Prepare pieces of parchment paper, 10×10 cm, and poke a hole in the middle. Pipe rounds on the parchment papers, and fry in vegetable oil until golden, either in a deep fryer, or in a pan with 4-5 cm oil. 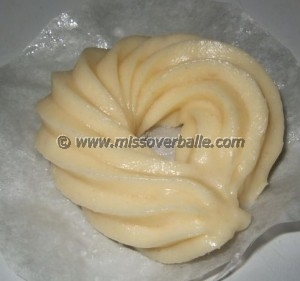 Re-use the parchment paper, it will loosen from the crullers while frying.

Take loads of pictures, and eat!