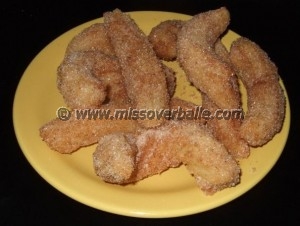 My boyfriend likes churros, which can be bought in Tivoli. Appearantly, many people eat them with chocolate sauce, but we like them tossed in cinnamon and sugar.

So, since my boyfriend recently bought a deep-frier, I made him churros. He liked them, but complained they were too thick. I used a 2 cm star nozzle, and I should probably just have used a 1 cm or 1,5 cm nozzle, I will try that next time. The taste however, is really nice!

Mix the flour, baking powder olive oil and boiled water to a sticky dough. Heat the oil to 160 degrees Celsius (either in a deep fryer or a pan), and transfer the dough to a piping bag fitted with a star nozzle. Pipe out the dough, cutting pieces of 5-10 cm with a pair of scissors. Fry the churros until golden, and toss in cinnamon sugar. Let the churros cool slightly before eating (they are hot!!)